We whizzed west from Calakmul at 8.16am on Feb 26th, on the way to Palenque, passing Swainson’s Hawk, Wood Storks and Crested Caracaras, as we entered a new avifauna, through farmlands and dog dead villages, along Route 186, where Laughing Falcons started to appear on roadside posts and the number of egrets began to increase exponentially. 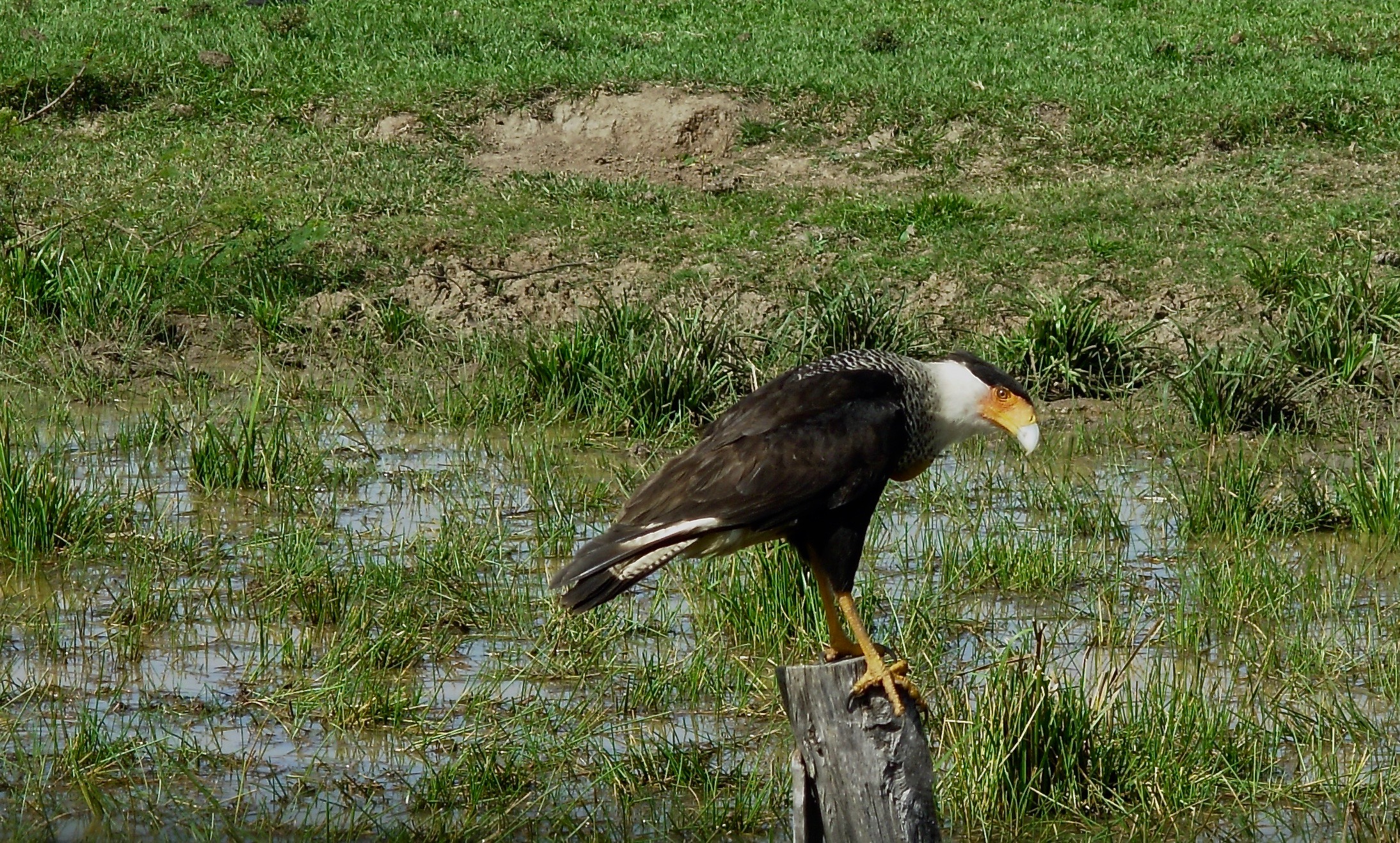 Several military checkpoints (“I wonder if he’ll let me play with his carbine, if I let him look thro’ my ‘scope?“) later and by 11am we turned off the tarmac at San Elpido, and drove slowly down a dirt track that threaded thro’ farmlands with marshy edges, stacked with birds. 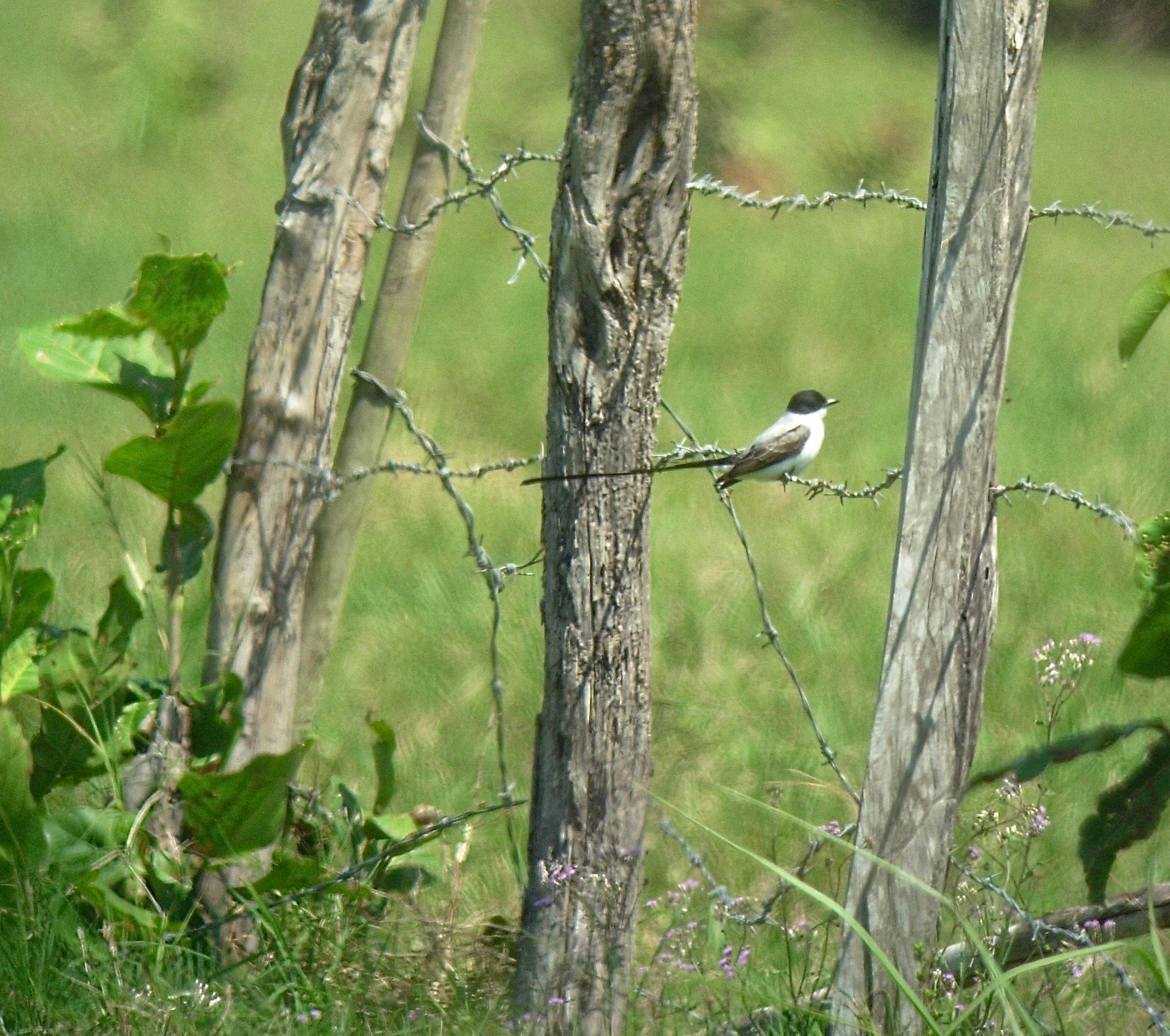 The great thing about Lesser Yellow Headed Vultures is that they tend to search for carrion low down, sweeping about just feet above the ground like demented harriers, and coming very close – much more amenable than high flying TVs and flappy flappy Black Vultures.

In the blue, blue sky above a superb White Tailed Hawk drifted over – our first of the trip.

As we moved on, the 186 sped through mile upon mile of marshland, ideal grazing, with flooded edges right by the road harbouring Black Bellied Whistling Ducks, Jacanas, herons, egrets and flycatchers by the gazillion.

Only problem was, there’s no place to stop on this fast road, so we kept going, until we turned off the tarmac again on the track to San Marco – more marshlands and pools, fields and flycatcher-friendly fencing, but at least you could stop whenever you wanted. Which we did. Frequently.

Spiny Tailed Iguanas behaved disgracefully at the side of the track, unconcerned by human presence – there are loads these imposing critters in Mexico, all mighty cool and aloof – even when they’re indulging in al fresco rumpy-pumpy. 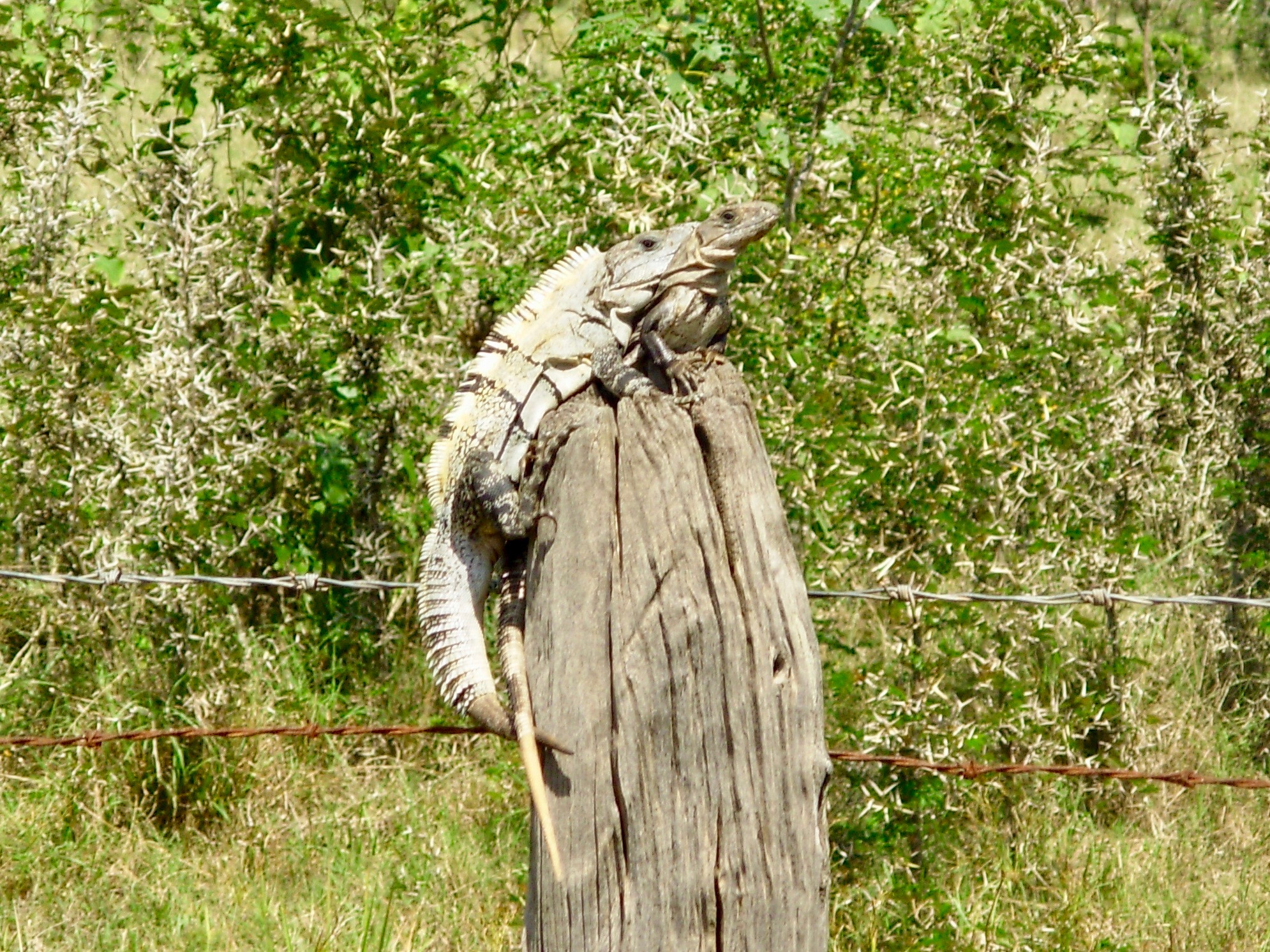 Raptors were exceptional here, and exceptionally obliging, perched up at the roadside, almost ignoring us as we got out to admire ’em.

Roadside Hawk and Aplomado Falcon were just stunning – the latter is supposed to be quite scarce, but we scored with at least 6 (3 in one field) in the Usumacinta Marshes to the north of Palenque over the next few days, lovely falcons.

Grackles and ground doves were at the trackside, with the odd Yellow Warbler, Bank Swallow overhead and a scattering of common wintering waders – Greater Yellowlegs etc.

Black Collared Hawk was a real bonus – again happy to sit by the roadside as we blatted it with digi-cameras pointed out of the window, like most raptors here it just didn’t care about us, as it sat deep in concentration and after a meal.

An Eastern Meadowlark sang from a fencepost as we crawled by – a highlight for me, as I’ve missed the species at Cape May up in New Jersey – like a few of the American wood warblers we encountered, it’s always nice to get a species back. 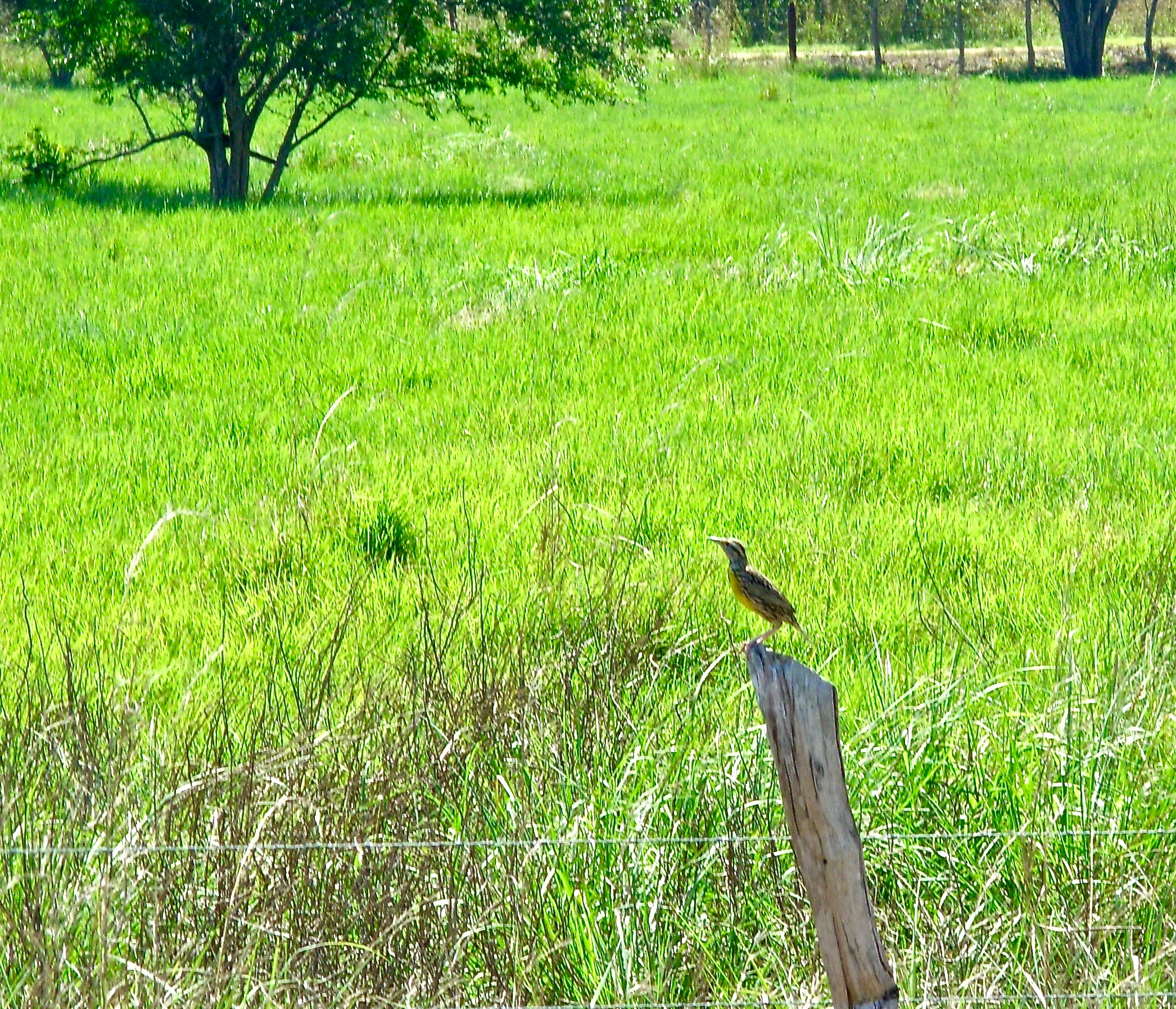 We pushed on, failing to find the much-praised track to Santa Rosa, but amid the traffic of bustling, crazy Balancan, Laughing Gull and Royal Tern flapped about the town’s ornamental concrete sided lake, and a stonking 15 foot long Alligator was hauled out in the sun, gob wide open, just waiting for an unwary dog/terrapin/child/grackle to come too close – superb.

We crossed the Rio Usumacinta at 2.30pm, and barrelled on towards Palenque, through rich farmland bizarrely like Cheshire!

Great big Ringed Kingfishers, much larger than Belted, with shining chests, sat up on wires, and as we got closer to our destination, it was reassuring to see that the rigorous  Mexican standards of traffic safety were strictly enforced in this neck of the woods. 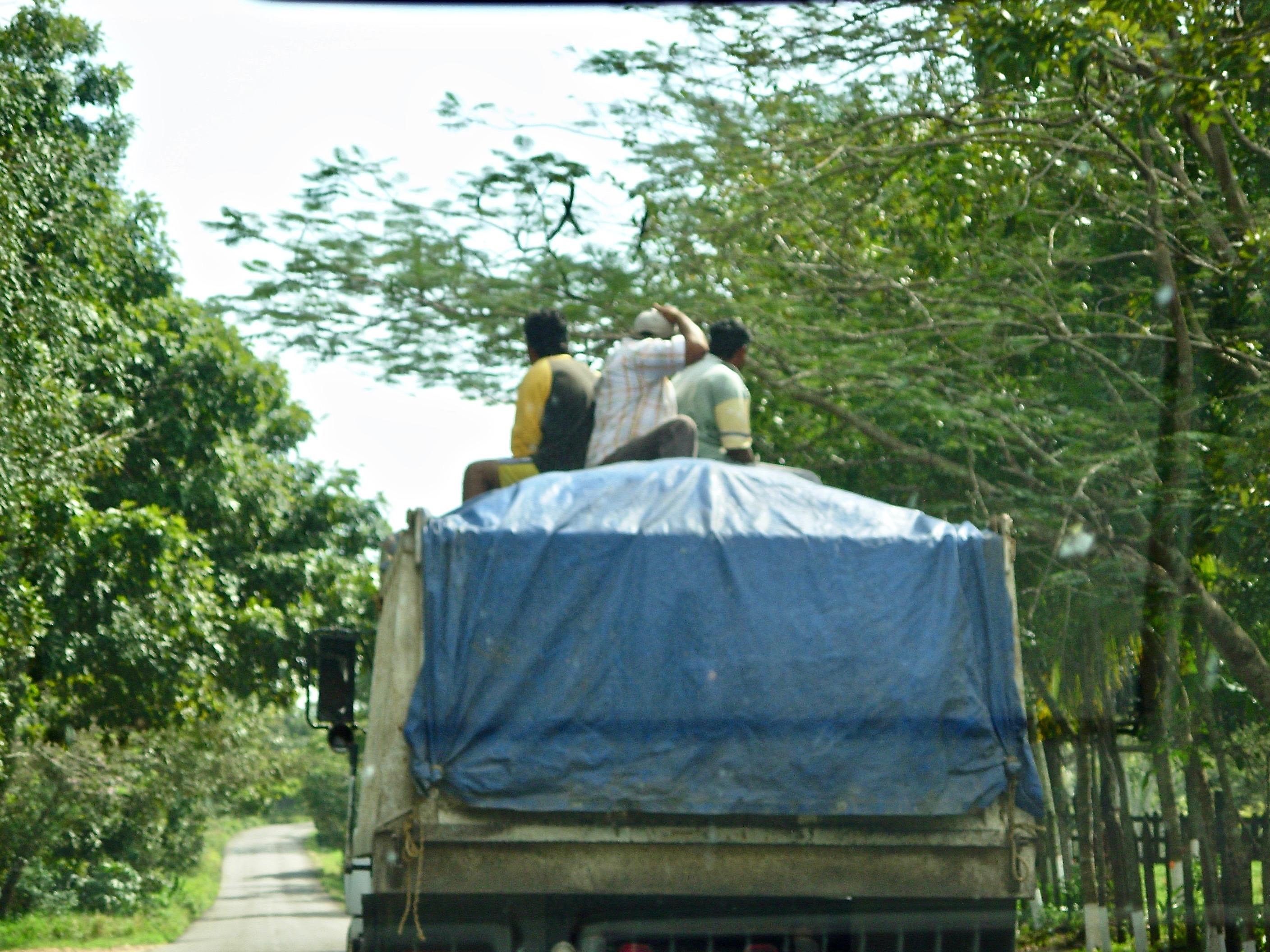 The high blue hills of the Sierra Madre de Chiapas rose above us as we pulled into Palenque and the edge of the real deal hardcore rainforest. Our digs (the cheapo, but clean El Panchan, not the posh “traveller” one) were just inside the park gates, and cost the princely sum of £18 for three nights.

Dumping the bags, we strolled out towards the recommended jungle restaurant/bar of Don Muchos – it was beer time.

We crossed a small bridge as the gloom began to gather, and on the dark forest stream below it, a brain-frying Agami Heron was fishing quietly – unbelieveable!

Naturally none of us had cameras, but just seeing a bird this hard to connect with, so close, was just astonishing.

Like looking into an alternate universe, or possibly heron heaven.

Most beautiful heron in the world? Probably.

We liked Don Muchos – the walk down to the place alongside the stream and dense jungle gave us Agami, Louisiana Waterthrush, Ovenbird, Wood Thrush and Yankee Warblers, and despite the high hippy quota, a night necking Modelos and Mescal, while listening to the Mexican bands and sounds of the jungle was just fine with us. 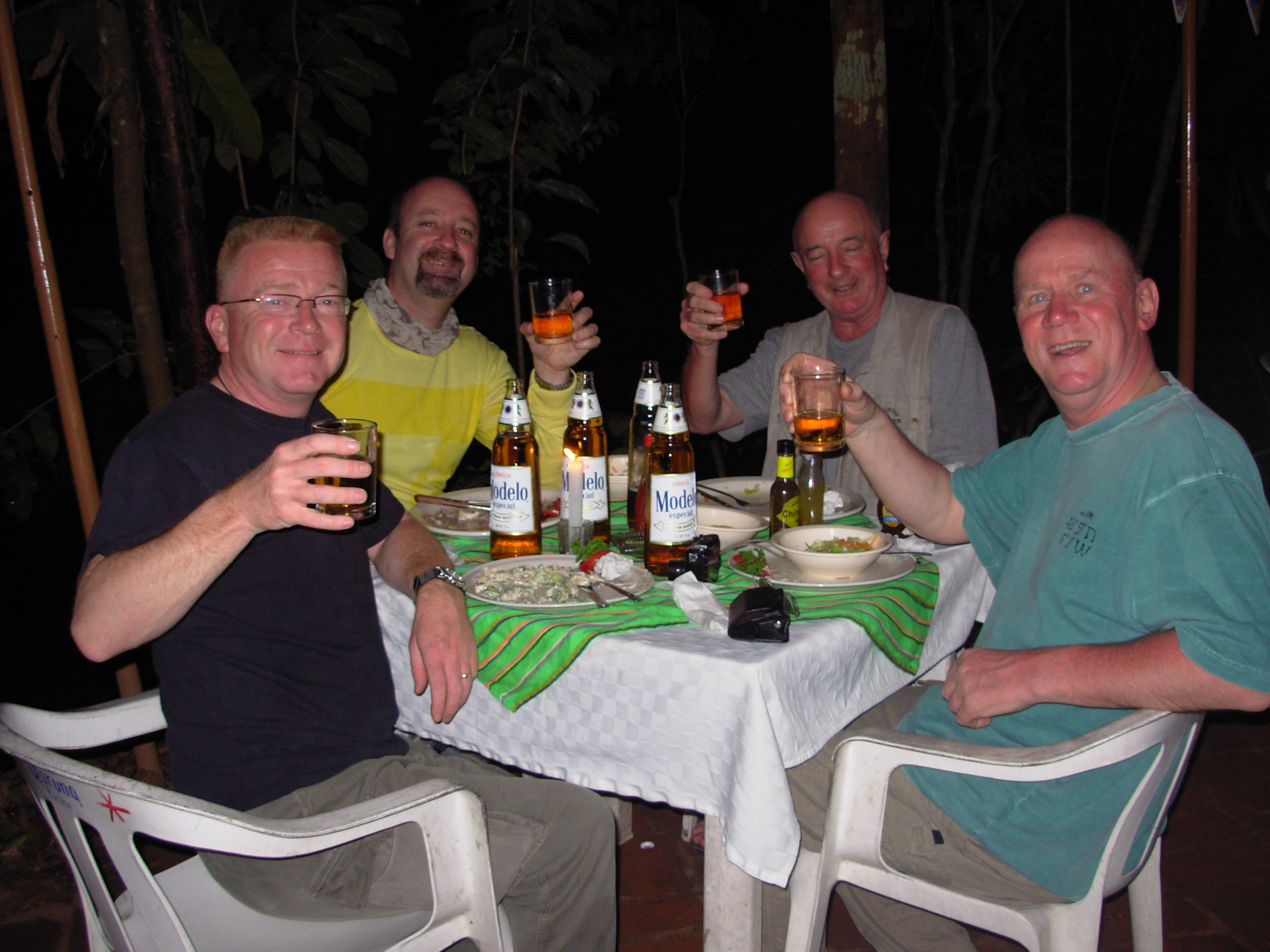 Once folk started fire dancing and we lost count of the tequila slammers, it was time to stumble off to bed.

With a spring our step and a slight headache behind the eyes, we were up before dawn the next day and went up to the temples and ruins that Palenque is famed for.

They don’t open till 8am, but you can walk rainforest trails in the meantime – dark, damp, wild places, cathedrals of towering buttressed trees, covered in vines and strangler figs, rushing streams and dense undergrowth.

Once into the temple complex we tried to get ahead of the crowds and moved straight for the temple of the cross, before spending the day wandering the trails and scoping the rainforest from the top of the structures.

Here’s a few more temple shots for the history freaks… 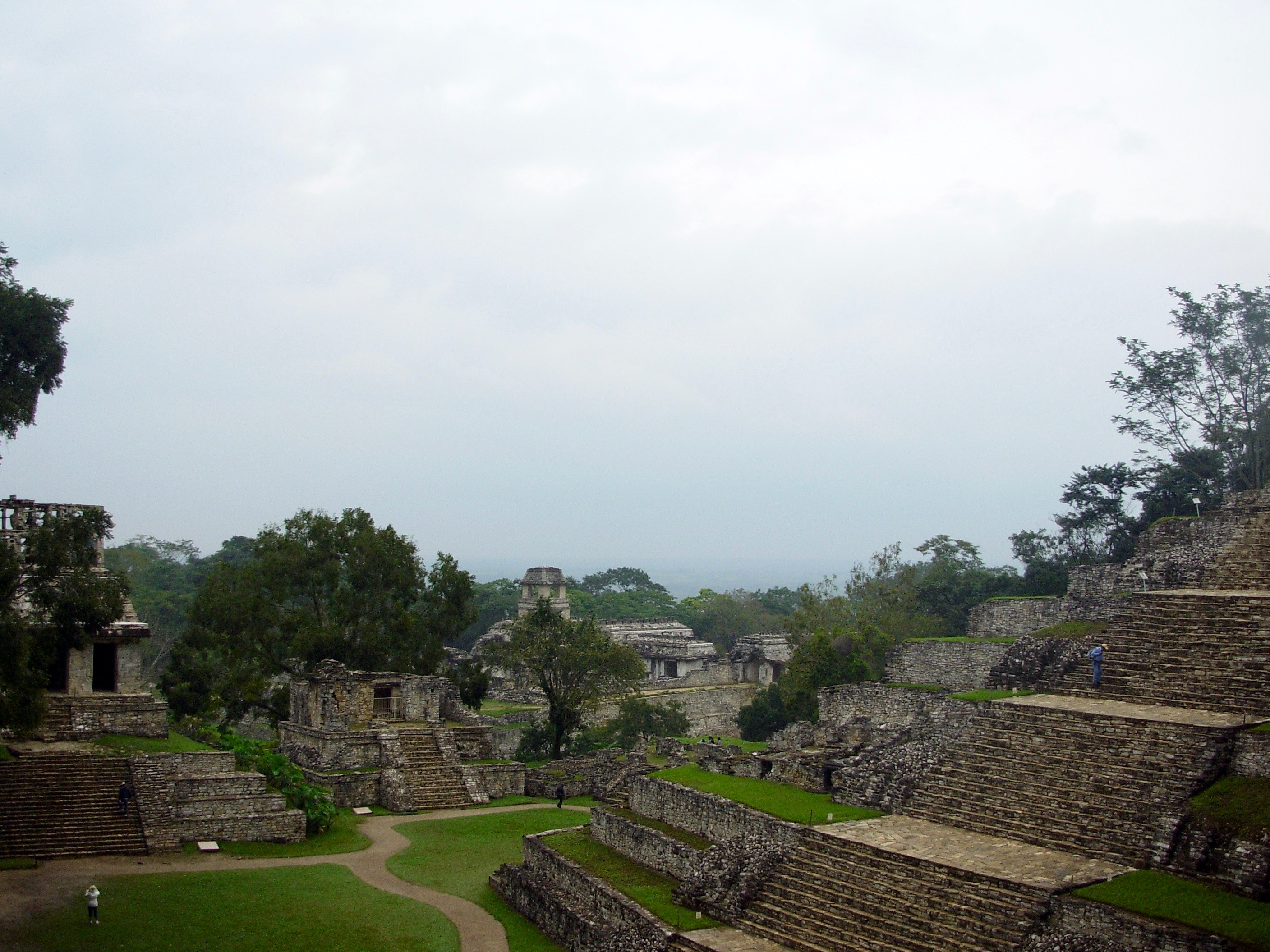 Good birds – Yellow Breasted Chat, Squirrel Cuckoo, Berylline Hummingbird etc showed, but they were kinda sparse – until we got to the tree.

The tree deep in the temple complex was fruiting and drew in an incredible variety of species….nothing for it, but to climb a nearby temple and scope the branches, weighed down by birdies. 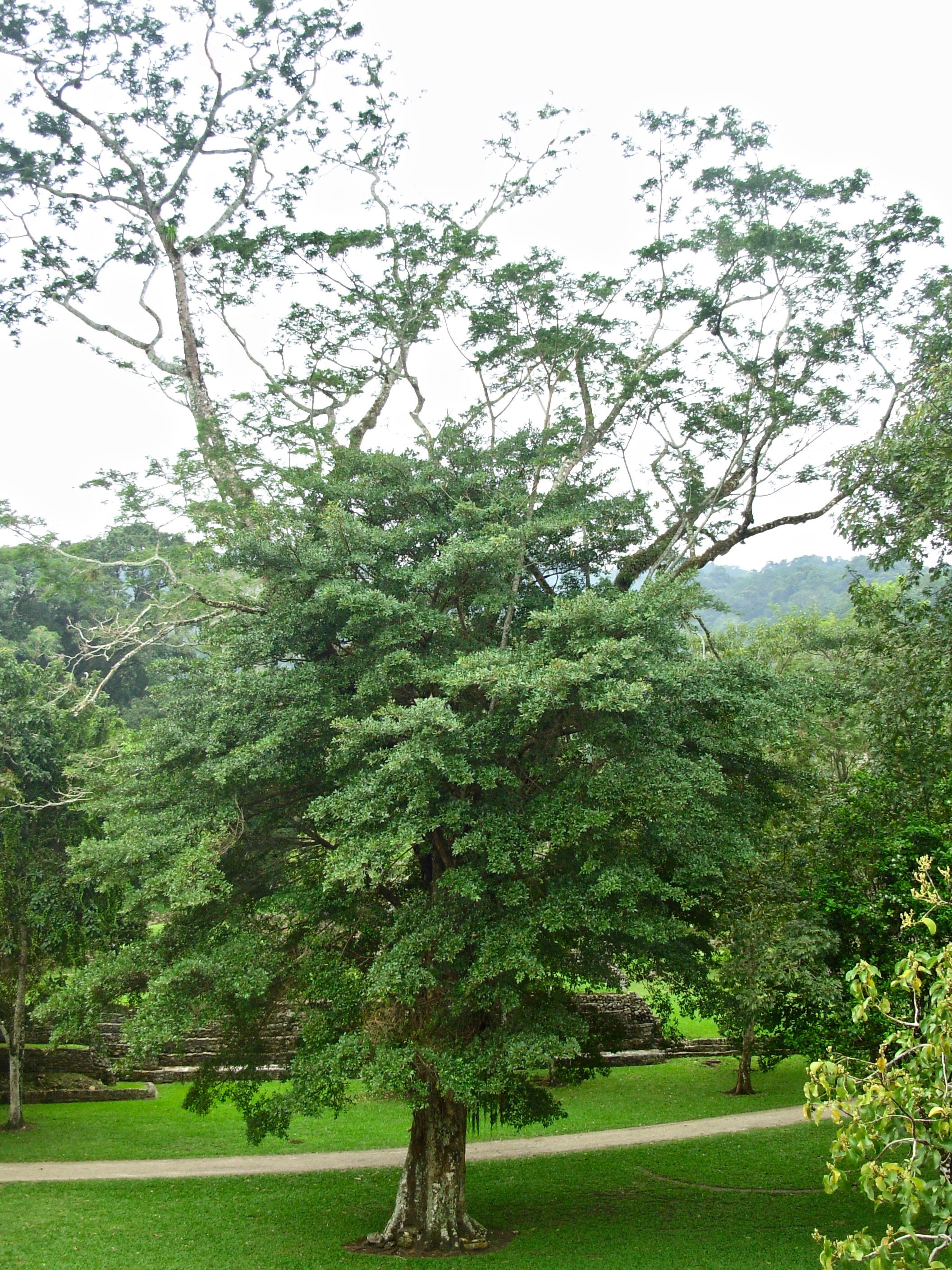 For once, a Violaceous Trogon sat the right way round to show off its yellow belly, allowing me to get a few shots in the gloom, while parrots squawked overhead and Turkey Vultures got up out of the rainforest for a spot of thermalling. 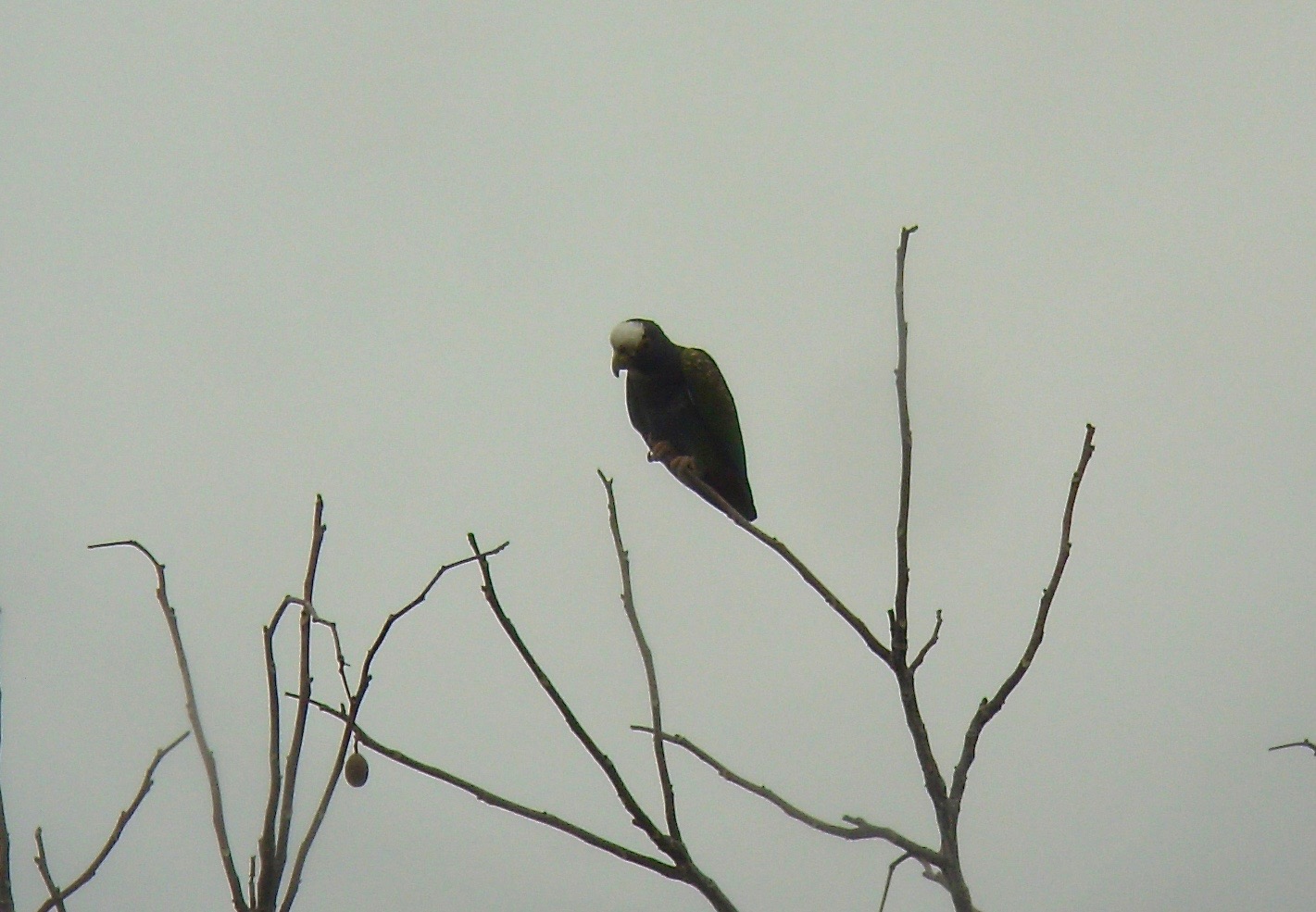 Pleasing to see White Crowned Parrots sitting up in the trees here, although the steamy, overcast day meant any shots taken from more than 50 feet way were always going to come out poo.

A wander round the temples brought us more warblers – Worm Eating, Magnolia, Black Throated Green, Black and White etc, and a nice Yellow Throated Vireo. A Bat Falcon sped through the compound, putting the willies up everything like a particularly flashy wee Hobby, and Least Flycatcher and Swainson’s Thrush popped up in the undergrowth.

A quick look behind the Temple of the Inscriptions (the trail is still closed, but we got far enough down it to see Slaty Tailed Trogon, Common Tody Flycatcher and Rufous Tailed Hummer), before heading back to the central temple for a spot of raptor watching.

We scoured the massive rainforest stretching up the slopes above us in the mist and raptors began to appear – Red Tailed Hawk, Coopers Hawk, Great Black Hawk and most magically of all, the target raptor here – White Hawk (picked up by Tropical, who was not surprisingly dumbstruck by his discovery). 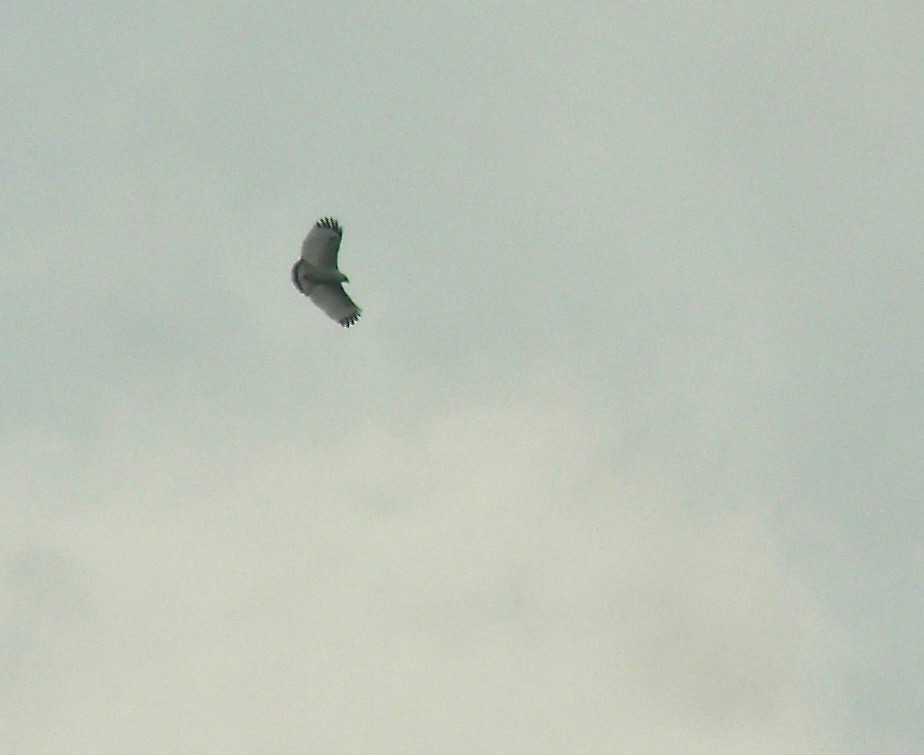 White Collared Swift, King Vulture, numerous TVs and Black Vultures passed over us, but as this was Mexico, the raptor watch wouldn’t be complete without a touch of the surreal.

We picked up a very high bird, with a long, long tail, gliding through the mist – thoughts turned to Swallow Tailed Kite, but it turned out to be a Magnificent Frigatebird – wasn’t expecting one this far inland…very odd. Very Mexico.

Leaving the ruins, we spent the afternoon birding the road back towards El Panchan – Nightingale Wren and Buff Throated Saltator were cool, but I missed a Scarlet Rumped Tanager (luckily Neill got me onto one of these stonkers the next morning).

The Saltators were feeding on figs around a wee eco-tourism place, and Swainson’s Thrush, Black Headed Trogons, hummers etc came in to join the feast. 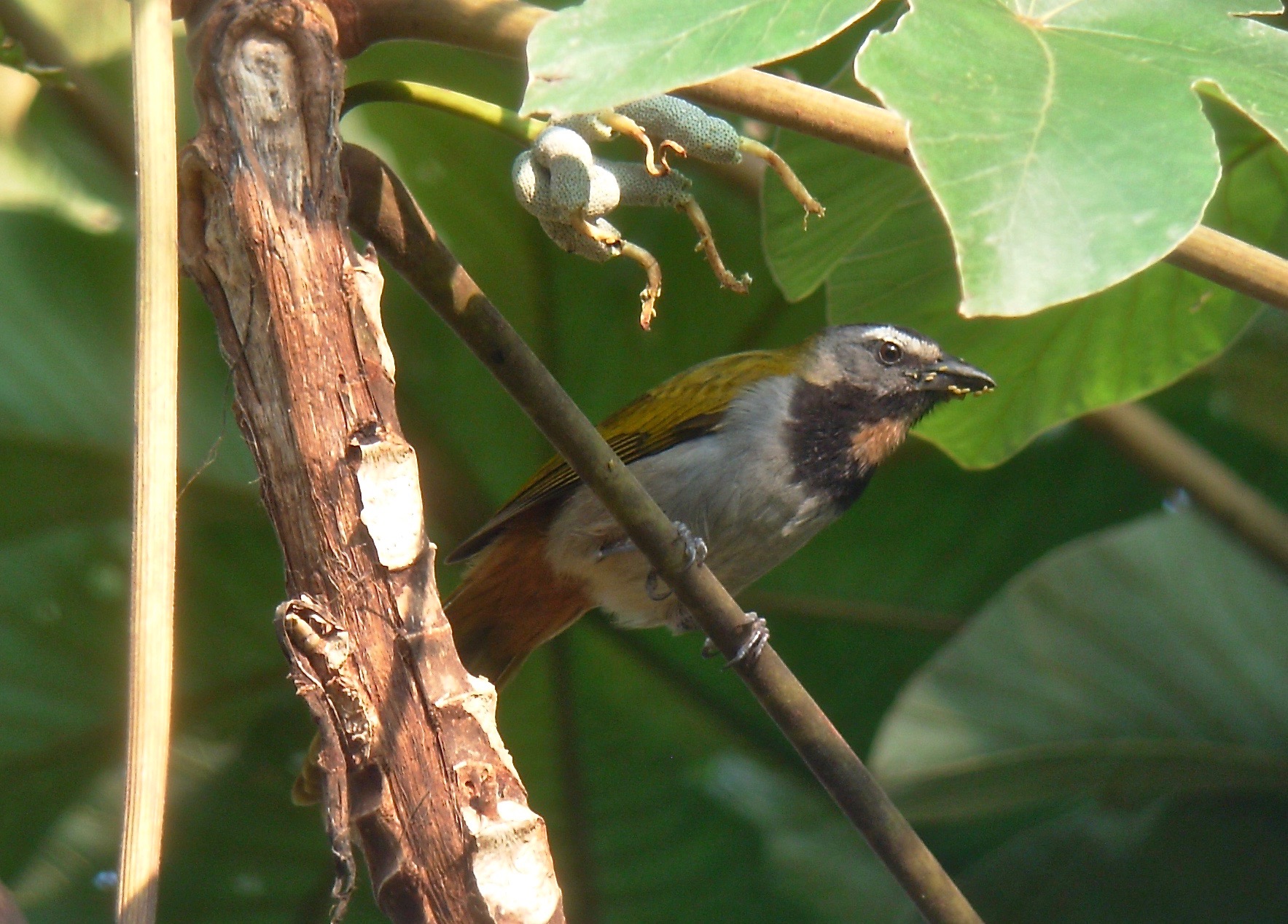 I tried digiscoping some of the American wood warblers coming down to a stream to drink, but they were just too flighty…even a particularly patient Hooded Warbler proved beyond my meagre skills.

Time for round two at Don Muchos.

Another day, another hangover, and we woken before dawn by the low growling of howler monkeys before a dawn hike into the rainforest just down the hill from the temple entrance.

The problem with rainforest birding is that the first man down the narrow trails gets the bird, while companions only a few feet away frequently miss it – so it was this morning, as I found a Mexican Antthrush, only for it to melt away into the vegetation on the sloping forest floor before the lads saw it.

(Movie fact film fans, apparently this area was where many of the jungle scenes in “Predator” where filmed).

Such is life – Trops got Royal Flycatcher in much the same way, although three us had already walked underneath it oblivious.

At least we all got great views of Collared Trogon and White Breasted Wood Wren, before taking a spin up the Ocosingo road for a spot of raptor watching at KM40. 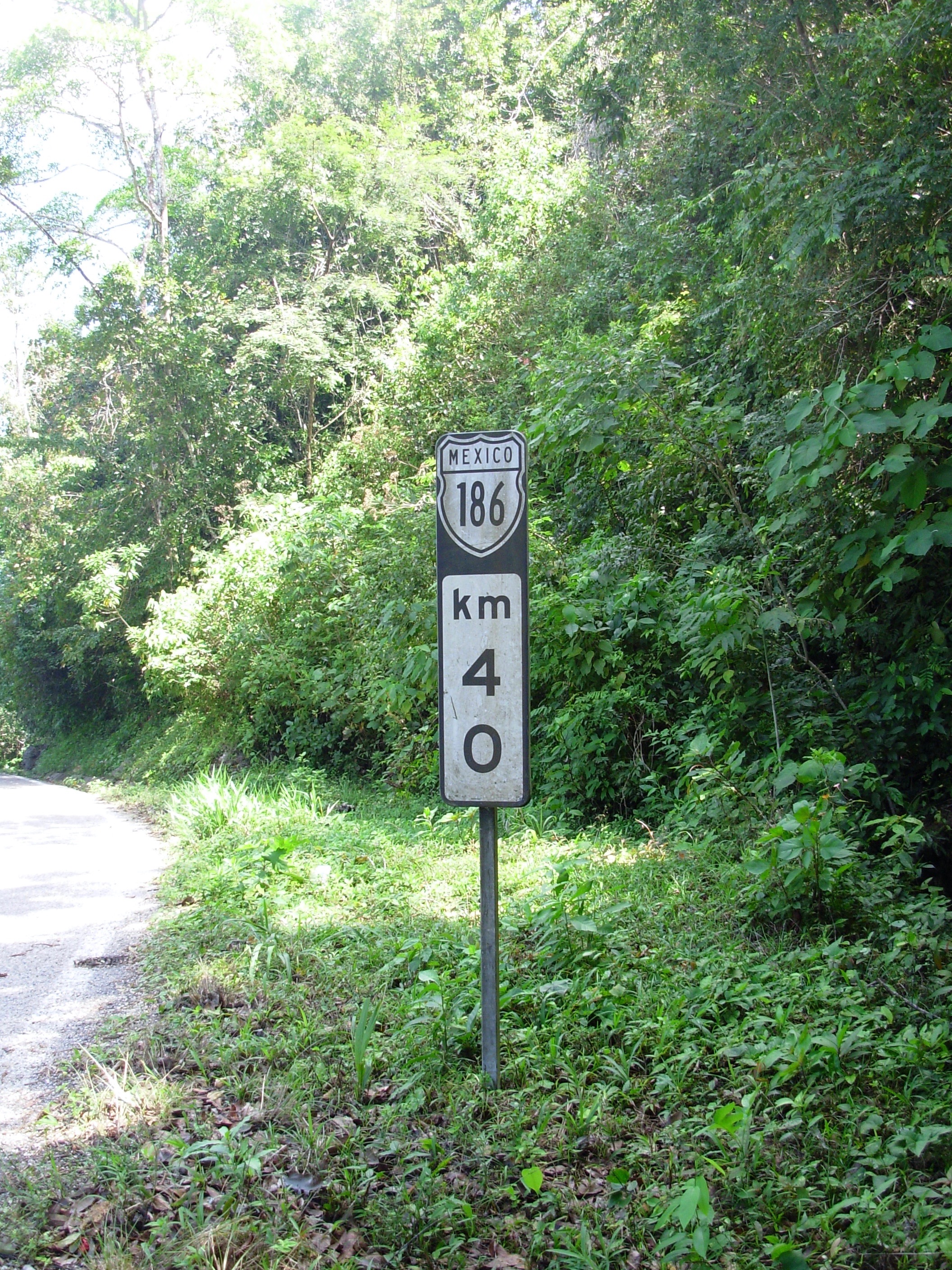 White Hawk, Short Tailed Hawk, Laughing Falcon and White Collared Swifts joined the vultures as we scoped from the side of the busy round out across the valley.

In the afternoon we returned to the Usumacinta Marshes for another blizzard of birds – plenty of Yankee waders, herons and egrets, flycatchers and a statuesque Jabiru, towering over everything in a fields that contained crowds of caracaras, vultures, egrets, White Tailed Hawk and Aplomado Falcon.

Crocodiles (Morelets?) floated silently in the quieter pools on the track down to San Jeronimo (a place we never found). Jacanas scurried amongst cattle and Anhingas were common – usually perched up drying their wings. 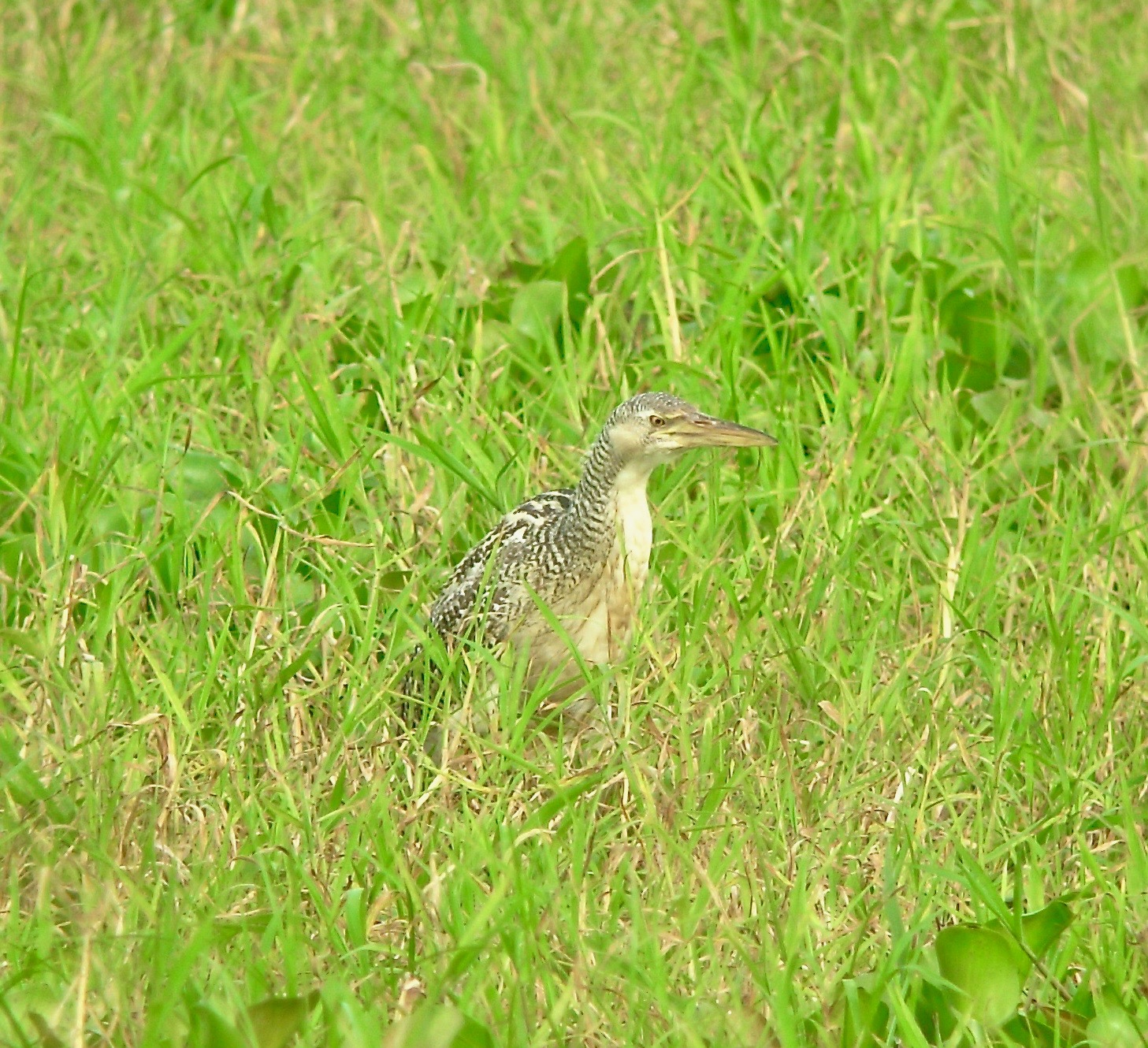 Leaving the marshes as the mosquito and bug horde began to sound like rain on the windscreen we stopped to marvel at a swarm of Lesser Nighthawks feeding over a cattle field, while Pauraques rose from the roadside.

Dawn on our final morning in Palenque, after another bruising evening in Don Muchos, and we tried the rainforest trails and road just before the temples again, scoring with Crimson Collared Tanager, Chestnut Headed Oropendola, Long Tailed Hermit, loadsa Yankee warblers and Squirrel Cuckoo.

Best of all, was a Blue Crowned Motmot (I’m not making these names up, honest), perched high in the canopy, and one of the species we were aching to connect with.

Then it was off up the Ocosingo Road for our next birding area – next stop, and next blog entry, the Sierra Madre de Chiapas highlands and Sumidero.

Thanks for sticking with it.